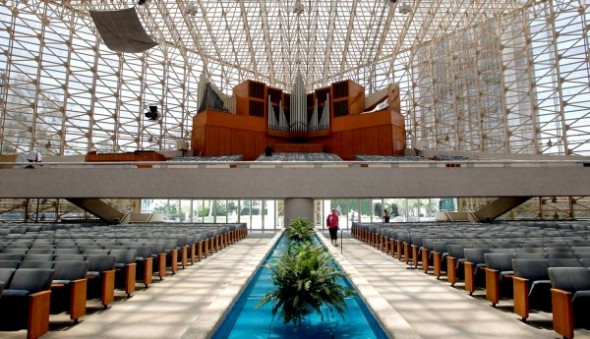 I was browsing my friend’s Facebook, and I came across the church where I got married.  Under it is an article discussing the demise of Crystal Cathedral and the deterioration of evangelicalism.  It is an article written by Jim Hinch who often writes for Orange County Register. In fact, I’ve had dealing with Jim in the past and find him to be informed enough on the religious/Christian landscape.

This article is worth reading only because it was written by a religious correspondent for a reputable newspaper.  One thing struck me when I read the article.  Hinch basically draws the parallel between the demise of popular evangelicalism (fundamentalism? revivalism? evangelism?) with the demise of the Crystal Cathedral. His mention of the Christmas programs, Easter programs and the Hour of Power brings me back the memory of us attending their Christmas program one year as a family.  However we feel about the Crystal Cathedral, we have to admit that it has experienced some incredible success for a number of years.  This is not a post to criticize or praise the ministry of Robert H. Schuller.  Rather, I find it just a bit curious that someone as informed as Hinch uses the Crystal Cathedral as a metaphor for evangelical demise.

In case someone thinks I’m criticizing Hinch, I’m not.  Rather, I’m noting the comparison Hinch makes.  It is a comparison that is more telling about evangelicalism than we may give it credit for.  To be sure, neither Schuller nor his ministry had ever been considered evangelical by evangelicals.  Sure some evangelicals do not mind associating with Schuller because of Schuller’s success.  That’s what evangelicals do.  They cling on to anyone with an appearance of success to further their own success.  Church is all about effects, results and instant impact.  As a Christian, I do not even doubt that Schuller “has led plenty of people to Christ.”  Whatever he might have done, he was not evangelicals.  Many hard-line evangelicals would’ve be mortified if they were to find Schuller associating himself with their camp (and he has not).  No church historian who has gotten his data right would’ve considered Schuller evangelical.

What should we do with this piece of ironic observation?  Evangelicals have mistakenly conveyed that its very western and lily white version of the faith is the entire Christian faith.  Evangelicals have become the victim of the gigantic PR machine that they have created (evident in recent scandals of Mark Driscoll).  When you rely on impression, whatever impression you create is up to the interpretation of the world. Sometimes, they do not interpret the sound bytes correctly. Then, perhaps it is time to think about the impression we create rather than trying to prop up the idol of hegemony.  After all,  Christianity is not the same as evangelicalism; it is so much bigger and better.

Articles from my other blog